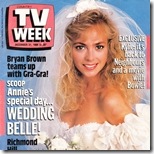 The previous blog entry highlighted some of the pressures faced by young stars going into soap operas and the sudden fame it brings.

Some of these actors do indeed go onto bigger things – names like Kylie Minogue, Guy Pearce, Jason Donovan, Craig McLachlan and Natalie Imbruglia all got their big break in soaps before international stardom called.  But while those names went on with their careers, one of their colleagues made a decision to take a step back from acting to focus on family.

Annie Jones (pictured) started in Neighbours as the studious Jane Harris – or as she was nicknamed ‘Plain Jane Superbrain’ – a role which she continued for three years at the height of Neighbours‘ popularity in the ’80s and won a TV Week Logie for most popular actress in 1989.  After leaving the soap, Jones went on to appear in the sitcom Newlyweds, mini-series Jackaroo and dramas Snowy, Bony, Embassy and even Chances.  It seemed inevitable that Jones would follow her former Neighbours cast-mates overseas.

But in 1994 the 27-year-old actress got the heart-breaking news that her mother was suffering Alzheimer’s and made the decision that family was more important than fame:

“I couldn’t move because I had to be able to see Mum.  I have no regrets about turning down work during that time. Mum and Dad were more important.

“This journey with Mum has definitely changed me. A lot of things seem to be very shallow to me these days.  I’ve realised empathy is the key to everything.  If we could all put ourselves in someone else’s shoes, just for a little while, I think we’d all look after each other a lot more.”

Jones, now 42, is now a campaigner for Alzheimer’s Australia Victoria, an organisation providing support and raising funds to help people living with the disease and their families.

Permanent link to this article: https://televisionau.com/2009/03/neighbours-star-quit-fame-for-family.html