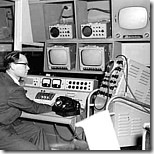 Television isn’t just about the faces and the shows that appear on-screen, it is also about the many that work behind-the-scenes, often in demanding and challenging environments.

One website, GTV9 Old Boys, is a tribute to the Melbourne channel’s early days and the people who worked backstage.

The site features a number of photos from GTV9‘s early days, giving a glimpse at some of the early technology and the people that helped put the station to air. Also featured is a photo gallery of recent GTV9 staff reunions held in 2006 and 2007, featuring a number of familiar names and faces. The website also invites former GTV9 staff to submit their own stories and memories of their time at the station, and there’s also an Old Boys Forum as well.

The GTV9 Old Boys is one of a few websites that are dedicated to the people that have worked in the industry. Another website is the 729 Club, remembering the social club formed in Sydney for television station employees – and yes, the club was named after channels ABN2, ATN7 and TCN9 as the club was formed prior to the arrival of TEN10 and SBS.

Another site, ABC Reconnect, was formed after recent staff reunions for ABC‘s 50th anniversary celebrations in Sydney and Melbourne and includes information of current events as well as many photo galleries from the history of ABC’s television operations.