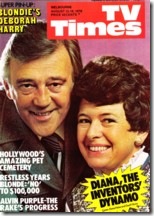 Diana: The inventors’ dynamo
A Sydney radio presenter famously dubbed her “Bubbles”, and for Diana Fisher of ABC‘s The Inventors, the nickname rings true – particularly given her belief in the restorative powers of champagne to cure anything from jet lag to a broken heart. But don’t be fooled by her effusive and happy manner, her colleagues remark that she is highly energetic with a fierce capacity for hard work and self-discipline, and is proud of the fact that she’s not missed taping a single episode of The Inventors in its eight years on-air. (Pictured: Diana Fisher and The Inventors‘ host Geoff Stone) 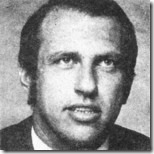 60 Minutes is ticking over
“It’s highly unlikely I’ll be on camera,” says Gerald Stone (pictured), executive producer of the new Nine Network current affairs program 60 Minutes which goes into production later in the month: “With a budget of $2 million and a staff of 28, it’ll be a full-time job organising and running the show.” Stone is working toward an on-air launch in November, and while the actual date and timeslot are “a heavily guarded” secret, some hint might be taken from its US namesake which is shown in prime time on Sunday nights. Stone also would not name any of the “three or four” reporters that would make up the show, although it appears certain that former This Day Tonight and A Current Affair political commentator George Negus, will be one of them.

Dear Star….
Fan mail comes from all walks of life and can be the barometer of success or popularity. Tony Alvarez – Dr Tony Garcia in The Young Doctors – receives regular fan mail from a nun in a Brisbane convent and her letters are his most treasured. Former Number 96 star Bunney Brooke once received ashes in the mail to replace the ashes of her character Flo Patterson’s cat when dotty Dorrie Evans (Pat McDonald) thought it was garlic salt and threw the ashes away. Blankety Blanks‘ Ugly Dave Gray receives applauds for his jokes from the show, and receives suggestions for material that he admits are “the filthiest thing you could imagine and there’s no way I could tell it on TV.” And Melbourne HSV7 weather girl Ilona Komescaroff is often held accountable for Melbourne’s ever-changing weather, with some viewers tending to think that she orders the weather, rather than report it.

Whatever happened to Alvin Purple?
Graeme Blundell, the actor who played the little man that women found irresistable in Alvin Purple TV series and movies, is being kept very busy with commitments with ABC‘s new series The Truckies, his work as director for Sydney’s Hoopla Theatre company, and preparing for work on the new movie The Odd Angry Shot, although he admits that the role he most wanted in the movie ended up going to Graham Kennedy.

Viewpoint: Letters to the Editor:
“I am complaining about certain shows being taken off the air. The Incredible Hulk is one of the best shows on TV for a long time. My family and I looked forward to Monday nights to see it, when suddenly it’s taken off the air! What is wrong with people in TV? They get an original show and then take it off and all we ever see are police or doctor shows or re-runs of movies.” H. Smith, QLD.

“Being a recuperating stroke case myself, I am interested in the case of Dr Tom Horton in Days Of Our Lives. If he was, say, 25 when Addie was born, and Addie was 25 when Julie was born, Tom would then be 50. Then another 25 years till David’s birth makes him 75. As David appears to be about 30, Tom would be 105! Rather old to be going back to work as a doctor. And poor Alice is about to have a hysterectomy at about the same age. American medicine must be far more advanced than ours!” L. Jones, NSW.

“It is difficult to put into words exactly what one feels about a TV show, especially one like Flashez which used to provide entertainment, information or just give us a glimpse at anything interesting. Although this show was taken from us more than seven months ago, I still think about it. Some people might say the comperes were off their heads – I agree, but I don’t think this is any reason to damn the show. Anyway, I love people who are off their heads!” J. McMahon, NSW.

What’s On (August 12-18):
This week marks the first anniversary of the death of Elvis Presley, and various movies and specials are programmed as a result. On Wednesday night, 16 August, HSV7 screens a three-hour special Memories Of Elvis, presented by Ann-Margret, including footage from Presley’s first TV special from 1968, and the 1973 special Elvis: Aloha From Hawaii. Later in the evening, HSV7 screens the movie documentary Elvis That’s The Way It Is and on the following night, HSV7’s Norman Gunston Show features a special tribute to Elvis. On Friday night, ATV0 screens a Presley movie double, Change Of Heart followed by Kid Galahad.

The Commonwealth Games from Edmonton, Canada, are coming to a close with live and delayed coverage all day Saturday, and the closing ceremony going to air live on ABC at 6.00am Sunday morning with one-hour highlights at 11.05pm Sunday night.

Federal Treasurer John Howard is announcing his Budget for the year and all networks are planning coverage, with ABC planning a half-hour special report presented by newsreader James Dibble and featuring interviews with Mr Howard and Opposition leader Mr Bill Hayden. HSV7 has a Budget Update in the mid-evening, followed by a late-night round-up with political correspondents Laurie Wilson and Mike Peterson. GTV9 has a 45-minute National Nine News presentation The Budget And You, with Peter Hitchener in Melbourne joined by Canberra correspondent Peter Harvey interviewing Prime Minister Malcolm Fraser, Opposition leader Bill Hayden and ACTU President Bob Hawke. ATV0 keeping its coverage understated with a five-minute update at 9.30pm and a fifteen-minute summary of the Budget at 11.30pm.

Sex shockers like Number 96 and The Box might now be things of the past, but ATV0 is still not averse to stretching the boundaries with a one-hour special Queensland Exposed, exploring nude sunbathing on the Gold and Sunshine coasts and interviews with people at a nudist colony called The Sunshine Families. Beach inspectors and business people also offering their views on what is seen as an alternative lifestyle.

Sunday night movies are Vanishing Point (HSV7), Vampira (GTV9) and Hunters Are For Killing (ATV0), although there’s also some big movies during the week with GTV9 screening the TV premiere of The Godfather over two nights, with the second night up against a repeat of The Great Escape on ATV0.