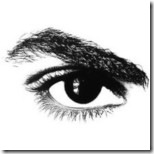 Newsflash for anyone living under a rock or on Mars for the last few days – the axe has fallen on Big Brother after eight years, over a hundred talent-starved celebrity wannabes, just about as many horrendous outfits worn by (the otherwise very able host) Gretel Killeen, and the ongoing scorn of the nation including one former prime minister who tried to do a Kerry Packer and pleaded “get this stupid program off the air.”

But, like it or loathe it, if one show could exemplify the format of reality TV and the pop culture phenomenon of the decade, Big Brother would have to be it. It may not have been the first of the genre but it was the first to give rise to saturation programming and viewer involvement via telephone voting and an internet presence.

The Big Brother format, where contestants would be ‘locked away’ from society with every movement recorded and influenced by the leader ‘Big Brother’, and would be voted off one-by-one by the viewing audience, was born in the Netherlands in the late 1990s and its success led to the format being franchised, with as many as 70 different versions around the world.

With the concept being so readily adopted by viewers, particularly in the younger demographics, it seemed to be a perfect fit for Australia’s Ten Network. Since the early-’90s, Ten has backed away from trying to appeal to all ages but rather focus on the advertiser-friendly 16-to-39 age bracket. During the 1990s, Ten achieved its focus largely due to imported product such as The Simpsons, Beverly Hills 90210, Melrose Place, Seinfeld, Baywatch and The X Files, but the supply of such programs could not last forever. Ten adopted the Big Brother format after it had been successfully employed by the United Kingdom’s Channel 4, a commercial network with a similar focus towards unconventional programming and youth appeal. 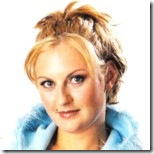 Over the next eighty-five days, while locked away in the Big Brother house situated at the Dreamworld theme park on the Gold Coast, the housemates would be challenged with physical tasks, managing a limited budget, sharing bedrooms and a bathroom and maintain a civil existence with a group of strangers, of varying personality types and backgrounds, all while under the watchful eye of ‘Big Brother’ and millions of Australians. 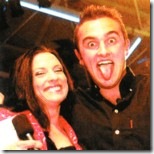 The eventual winner of the first Big Brother series was Sydney-based Ben Williams (pictured, with Killeen) who took the show’s $250,000 prize and embarked on a campaign of charity work, in particular for the World Vision organisation. Series runner-up Blair McDonough from Melbourne, went on to become a soap star in Ten’s Neighbours, and second runner-up, the raucous but likeable Sara-Marie Fedele from Perth, became something of a minor celebrity phenomenon with a release of a CD, a book, and appearances in other Network Ten programs such as Totally Wild. She later re-emerged as the face of smoke-busters Nicobate and as a contestant on Celebrity Big Brother and the Seven Network‘s Dancing With The Stars.

Other housemates from the first series to gain some public profile included Pete Timbs who later became a writer for TV Week and a radio presenter, and Jemma Gawned moved into the cosmetics industry and appeared on Good Morning Australia and Search For A Supermodel. Another series one housemate, Gordon Sloan (pictured) later became known for participating in the ‘human shield’ protest in Baghdad. In 2007, the 34-year-old died after a suspected drug overdose or may have been drugged by another person.

Of course, over eight seasons of Big Brother, the show has proven to be an instant headline-seeker, whether deliberate or otherwise:

Over its eight seasons, Big Brother has been more than just a few hours of television a week. As well as the half-hour daily shows there were the Sunday night evictions, Monday night nomination shows, surprise evictions, intruders entering the house, intruders evicted from the house, ‘adults-only’ shows, talk/panel shows and interviews and even spin-offs like Celebrity Big Brother, Friday Night Live, Big Brother Up-Late and a rather forgettable pantomime. There has been live streaming over the internet and content delivered to mobile telephones, online chat rooms, forums and blogs. Big Brother was constant fodder for breakfast radio, both in content and in talent with a number of former housemates now employed in radio, and gave talk-back radio listeners a constant cause to vent their annoyance at its existence. 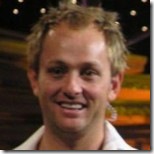 Thousands have been employed on the show behind-the-scenes, as well as a small cast of hosts on-camera including Mike Goldman (pictured), who was not only the voice-over announcer for the daily show, but also hosted the Friday Night Live show and had his ad-lib skills tested with Big Brother Up-Late and this year as fill-in host on the Sunday night eviction show. 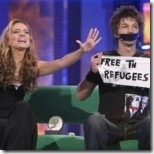 And as the public face of Big Brother, Gretel Killeen had the unenviable task each week of keeping the Sunday night eviction shows under control, while having producers shouting directions through her earpiece, and while trying to control an auditorium-filled crowd of hysterical teenagers, all while trying to keep some level of conversation flowing with family and friends of nominated housemates, and the evicted housemates on-stage. It was a task that not many TV presenters would have had the ability to maintain but Killeen was tireless in her role. (How many others would have coped as well with the silent protest of evictee Merlin, pictured, on stage in 2004?) 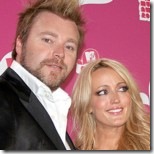 When changes were made to show at the end of the 2007 season, after a drop in ratings, Killeen was let go from the show and replaced with controversial but not-very-likeable pair Kyle Sandilands and Jackie O (pictured). Not a popular decision given Killeen’s abilities (and also Ms O’s TV resume including such hits as Australian Princess, The Nation and Undercover Angels), but one seemingly made by producers to make a point that Big Brother in 2008 would be different than before.

So when Big Brother began in 2008, there were the two new hosts, there was the return of ‘adults-only’ via the new weekly show Big Mouth, hosted by another two unusual choices Tony Squires and Rebecca Wilson, Big Brother Up-Late was gone, and the process of nominations was changed. Added to all this was a somewhat overindulgent casting of housemates with unusual attributes, either physically or otherwise – as opposed to genuinely interesting or appealing housemates – and the reliance on “celebrity” appearances such as twerpy teenager Corey Worthington, flamboyant Carson Kressley and blonde-and-big-busted Pamela Anderson. As a result, Big Brother in 2008 became a mere parody of itself. Ratings dropped and criticism of the show increased, but Network Ten continued to soldier on in its support of the show, claiming that it was tracking well in its desired demographics. However, when federal treasurer Wayne Swan delivering his budget speech was being watched by more viewers than Big Brother, even Ten must have realised the show’s time was up hence this week’s announcement that the show will not return after this year’s season finale.

Even though Big Brother rides off into the TV sunset early next week, it may not be gone for long. Speculation is already rife that the format could be adopted, in one form or another, by one of the other networks or even be revived by Ten at a later stage. It is hard to imagine that a show that has been such a pop culture phenomenon will just disappear without trace. Time will tell on that one.

Permanent link to this article: https://televisionau.com/2008/07/from-big-brother-to-big-bother.html