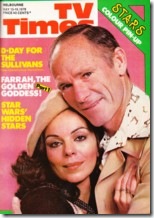 The battle of Bacchus Marsh
The producers of Nine‘s World War II drama The Sullivans have revealed one of the show’s most overworked ‘actors’ – an olive tree. The lone tree, located in Sunbury just outside of Melbourne, has been photographed from just about every angle to give a touch of the Mediterranean to location filming for battle scenes set in the island of Crete. Producers had spent months recreating battles of war in Crete, Greece, North Africa and surrounding nations – as taken from official war records – on location in Fiskeville, a small area near Bacchus Marsh on the outskirts of Melbourne. A central storyline in the Cretan battles involves a Greek woman Melina, played by Chantal Contouri, and also features Gus Mercurio as an American soldier, alongside series regulars Norman Yemm, Steven Tandy and Peter Hehir.
(Cover picture: Chantal Contouri, Norman Yemm)

How jockey Donnie is riding high 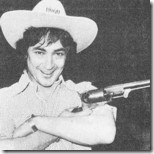 Sound Unlimited host Donnie Sutherland (pictured) and producer Graham Webb reflect on the development of the Seven Network‘s Saturday morning music show, screening on 21 stations around Australia and with negotiations in place to syndicate the show to Hong Kong, Manila and Bangkok. Sutherland, a former radio disc jockey with stints at stations including 2UW Sydney and 4BK Brisbane, claims that Sound Unlimited has boosted the sales of colour TV sets: “When colour was starting, families would be in the shopping centres on Saturday morning and they would see our show – and a lot of our material was in colour. Not only did that help sell sets, but it also established Sound Unlimited in people’s minds.”

A scornful look for a pretty girl? 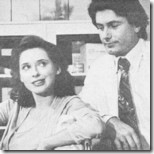 Gai Smith, a newcomer to Nine’s soap The Young Doctors as fashion designer Natalie French, comes face to face with Dr Chris Piper (Bartholomew John). Smith, who had graduated from drama at the University of NSW and played roles in the United Kingdom and Canada, is introduced to the series as an awkward patient who won’t take advice from experts.

Debbie Byrne in Cop Shop
Pop singer Debbie Byrne has recorded a small guest role in the Seven Network police drama Cop Shop, playing the next-door neighbour who befriends Christine (Louise Philip). The role is expected to be a recurring one.

Viewpoint: Letters to the Editor:
“I am a football fan that likes to watch The Big League (ATN7) and The Amco Cup (TEN10), but I usually miss The Amco Cup because it finishes too late. They would be wise if they made repeats. Then viewers would not watch their favourite football team half asleep.” J. Austin, NSW.

“Mr Ian Meldrum, if you cannot say something nice about someone I suggest you don’t say anything at all! During the review of the Top 10 on Countdown (9 April), you said about Bonnie Tyler (It’s A Heartache) “… and it’s becoming a bit of a pain…”. When you reached the number one song by The Babys (Isn’t It Time?) you said “… and isn’t it time they got off the Number One spot and gave someone else a go?” A good pun, but in bad taste. Mr Meldrum, isn’t it time we had a change of critics on Countdown because you’re becoming a bit of a pain.” F. Williams, NSW.

“Countdown‘s Ian Meldrum out to try and get his act together a bit more. He could learn off by heart that the past tense of “come” is “came”, and he could do something about background music which is intruding more and more into the “talk” segments of the show.” T. Phelan, NSW.

What’s On (May 13-19)
After last week‘s screening of the pilot episode of US comedy The Love Boat, GTV9 settles the ongoing series into Monday nights as the lead-in to The Don Lane Show.

ABC presents a special 200th episode of A Big Country, documenting the re-creation of the ill-fated Burke and Wills expedition through Central Australia. The re-enactment of the 1860 expedition also failed, though not through the explorers perishing as Burke and Wills had, but rather the failure of their method of transport – camels – to complete the journey. ABC also screens a repeat of A Big Country‘s 100th episode which tells the story of the completion of the Overland Telegraph from Adelaide to Darwin.

Saturday matinee movies were a staple of commercial TV, and the week’s schedule included titles The Nutty Professor (ATV0), Invitation To The Dance (HSV7) and The Cracksman (GTV9).

Country music returns to ABC with another series of Country Road, hosted by Johnny Chester and featuring guest artists Judy Stone and Jimmy Little. The program is being produced in Brisbane.

Sunday night movies are The Girl From Petrovka (HSV7), The Legend Of Valentino (GTV9) and Petulia (ATV0). The 13th and final episode of I Claudius screens on ABC.