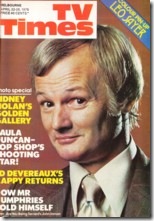 Serves him right!
On the eve of his visit to Australia, Are You Being Served? star John Inman (pictured) talks to TV Times about his stage career and the fame that comes from being in a hit TV series. But the actor, who admits being in his early 40s, is reluctant to discuss his private life, except that he is a bachelor with no plans to marry, and despite criticisms from the gay lobby about his flamboyant portrayal of Mr Humphries, he says he is asked by the same groups to write for their publications or speak at their meetings, “well of course I wouldn’t”, he says.

$10m Aussie programs take plunge at Cannes:
Australian programs worth more than $A10 million are about to go on show at the Cannes TV festival MIPTV. ABC, Crawford Productions and the Australian Film Commission will have a presence at the week-long festival. Australian titles being presented to representatives of more than forty countries include documentaries Edge Of The Cold, A Big Country and Peach’s Australia, dramas Pig In A Poke, Young Ramsay and The Sullivans, and telemovies Say You Want Me, Cass and A Good Thing Going. 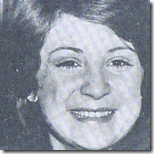 Louise’s happy birthday:
Former Bellbird actress Louise Philip (pictured) got a surprise phone call on the day before her 21st birthday: “You’ve got a new TV role in Cop Shop.” The young actress who had played orphan girl Christine in Bellbird had been left paralysed from the waist down in a car accident in 1973, and told she would never walk again. In Cop Shop, Philip will play teenager Claire O’Reilly, the daughter of Sgt O’Reilly and his wife Marion, played by former Bellbird cast members Terry Norris and Gerda Nicolson.

Ed Devereaux’s feeling like a million:
Former Skippy star Ed Devereaux had left Australia an unhappy man in 1970, but years later is happy to return home for the occasional visit. The actor is in Australia for the role of a disgraced former cop in the movie The Money Movers, and has turned to script writing with a proposal being considered by BBC.

Viewpoint: Letters to the Editor:
“ABC had no sense to drop a great show like Flashez. It was interesting, educational, informative and very enjoyable.” E. Wade, VIC.

“Seated in their ivory tower, with their vision reduced by skyscrapers, it would appear that ABC’s programmers are more concerned about ratings from nearby city dwellers than Australia as a whole and overlook the fact that city people have a wide range of entertainment not available for country folk.” W. Hopson, WA.

“Are showbusiness personalities so insecure that they must continually be reassured by a seemingly endless procession of awards, presented with all the ballyhoo that has come to be associated with such events?” A. Dickens, NSW.

What’s On (April 22-28):
ANZAC Day is on 25 April, and both ABV2 and ATV0 screen live telecasts of the ANZAC Commemoration March from the Melbourne CBD. In the afternoon, ABV2 continues the ANZAC theme with documentaries on the Australian Light Horse brigade, and armed services legend Albert Jacka who won the first Victoria Cross awarded to any Australian during World War I. Later that evening, ABC presented Australians Remember, filmed at the Australian War Memorial in Canberra.

ATV0 screens a 90-minute special The Confessions Of Ronald Biggs: The Great Train Robber. British fugitive Biggs makes a series of confessions and makes new claims about the famous $6 million robbery, labelled by some as the Crime of the Century. The special, filmed in secret in Brazil, was commissioned by Reg Grundy Productions for the 0-10 Network, and headed by former ABC producer Barry Sloane.

ABV2 presents Wednesday night specials; a repeat of Peter Allen In Concert, performed at the Sydney Opera House, and a one-hour documentary on the work of artist Sidney Nolan.